Black oxide is the conversion of a base metal material to an oxide of that base metal material. A prime example would be Fe3O4, which is black iron oxide, otherwise known as magnetite; another is a CuO, or copper monoxide. It occurs when the chemicals react with a base material to form an oxide of the base’s primary constituent. In the case of stainless steel, not only does it form oxides, but it also forms sulfides of the base materials that tend to be black as well.

Generally, the term ‘black oxide’ has taken on a bigger definition in that almost any inorganic black produced on a metal substrate could be referred to as a black oxide coating. That might not necessarily be absolutely true; it could be a deposit, and — in the case of room temperature black oxide — it is putting down an immersion copper and then subsequently forming either selenides or tellurides, which tend to be black compounds on the surface. Some other metals that also could be blackened include zinc, pewter, or aluminum. 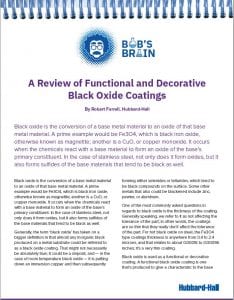 One of the most commonly asked questions in regards to black oxide is the thickness of the coating. Generally speaking, we refer to it as not affecting the tolerance of the part; in other words, the coatings are so thin that they really don’t affect the tolerance of the part. For hot black oxide on steel, the Fe3O4 type coatings thickness is anywhere from 0.4 to 2.4 microns, and that relates to about 0.00016 to 0.00096 inches; it’s a very thin coating.

Black oxide is used as a functional or decorative coating. A functional black oxide coating is one that’s produced to give a characteristic to the base material; it could be used to enhance the corrosion protection of the base material, or it could be for optical purposes to affect or alter the absorptivity and the reflectivity of the part. Black oxides are also used for anti-galling purposes to modify the friction of meshing parts. Decorative applications are more for aesthetic appeal or for the presentation of the part at point-of-sale. For example, black oxide conversion coating on steel has been used in the firearms industry for a very long time, and it’s used for a functional purpose to enhance both the abrasion resistance and the corrosion resistance of the firearm, but it’s also used for decorative purposes particularly in commemorative type firearms.

Let’s take a look at some common questions that have been asked regarding functional or decorative black oxide coatings:

For decorative hot black oxide, if I start with a shiny steel part, will the blackened part have a shine as well? What about a dull steel part?
When you look at hot black oxide, they’re not all created equal. It really comes down to the substrate as well. For instance, on steel, the black oxide will typically take on the same level of gloss or polish as the substrate; it doesn’t have a dulling effect. It doesn’t really enhance the brightness, but the black may appear brighter — of a higher luster — than the bare material that is polished. In the case of the hot black oxide and steel, it takes on the degree of luster that the base material has. If the part is matte to start with, the black oxide will be matte; if the part is a high-gloss, the black oxide will be high-gloss. For black on copper or black on brass, the black oxide produced always tends to be dull. A unique thing about the black on brass and copper is what is called the ‘nap’ that is present on it; when the part comes out of the blackening solution and is rinsed, it almost looks like it has a velvet appearance. If you rub it, that nap lays down, and the part will be dull. On substrates that are dull — or for oxides that produce a dull black —if you want a glossy finish, you’ll have to rely on a subsequent topcoat.

When compared with a blackened steel part, why does a blackened stainless- steel part for decorative hot black oxide possess more of a dull, matte finish?
That’s very similar to the black on copper; it’s the nature of the black itself. Black on stainless steel is a combination of oxides and sulfides of the alloying constituents of the particular stainless steel that’s being blackened. Although oxides — as in the case of steel — might take on the luster of the substrate and could be bright, the black finish on SS tends to be duller because of the presence of the sulfides mixed with the oxides. The stainless-steel black will always be duller — or take on a duller appearance — than the base material.

For decorative room temperature black oxide, if I start with a shiny steel part, will the blackened part have a shine as well? What about a dull steel part?
It’s much less frequent to see room temperature black oxides used for decorative purposes. They might be used to enhance the salability of the part — which could be conceived as decorative — but they are rarely used. Instead, they are used more for functional purposes. Room temperature blacks being really selenides of copper or copper telluride; if someone is using a tellurium-based room- temperature chemistry tend to be dull deposits anyway. They will dull the part, and the black will be duller than the substrate material; it could be enhanced with a topcoat, but they do naturally tend to be duller type finishes. A dull part will remain dull after blackening.

For function use, if I black oxide a steel part, what kind of corrosion protection can I expect from the black oxide coating? What about a blackened stainless steel part?
With black on steel, the oxide coating —the magnetic magnetite Fe3O4 coating— will give a certain degree of corrosion protection, particularly if it were to be sealed with an inorganic mil-spec specified seal. Mil-C-13924D for black oxide on steel and had originally recommended chromic acid dip afterward. The black oxide — particularly with chromic acid after it —will give up to two hours of salt spray resistance (ASTM B117) without a supplemental topcoat. There is so much variability in the corrosion resistance of a given part; it’s alloy dependent, hardness dependent, micro structure-dependent, but more importantly, the biggest contributor is the subsequent topcoat that is put on it. Black oxide on steel tends to be somewhere between nanoporous and microporous and is simplistically stated, a coating that acts as a sponge and will bond and absorb subsequent topcoats to a much greater extent than the bare substrate itself. With black oxide on a steel part — with a given topcoat — it could give twice the salt spray resistance than the substrate with the same top coat, but without the black oxide. If you were to put water displacing corrosion preventive —which is probably the most common type corrosion inhibitor— on a black oxide, you might get 80 hours on the black oxide, where you’d only get 40 hours on the bare steel substrate itself. For steel, you do get a little bit of corrosion resistance from the oxide coating, but much more due to its ability to absorb the topcoat. Stainless steel black — being a blend or a mixture of oxides and sulfides —does not impart any corrosion protection enhancement to the part. In other words, if you were to salt spray the stainless steel part unblackened, you’d get the same result if you were to salt spray it with a black coating on it. Due to the fact that sulfur is present in the coating, you may actually see that you get slightly less corrosion protection with the black on it. Being a microporous or a nanoporous type coating, the stainless steel black will also absorb a topcoat to a greater extent. With stainless steel, it depends on the corrosion resistance of the stainless itself, which is ordinary very high — particularly if it is passivated—or passive before the black. If you want to enhance the corrosion protection above and beyond what you’d ordinarily get with stainless steel, you could use water displacing or a water-soluble oil to do that.

For functional hot black oxide, what temperature range is the functional black oxide coating on a steel part stable?
My experience is if you have black oxide on a steel part and it’s not sealed — it’s just the oxide, it’s been rinsed, no chromate seal and no corrosion inhibitor top coat — and you were to put that in an oven, it should hold up to 700°F before you see any type of discoloration or mottling. When I talk to customers, and they ask that question, I say you could probably go up to 700°F, but after 700°F, you’re going to start to see some oxidation occurring that may be a conversion back to more of red rust and maybe spots.