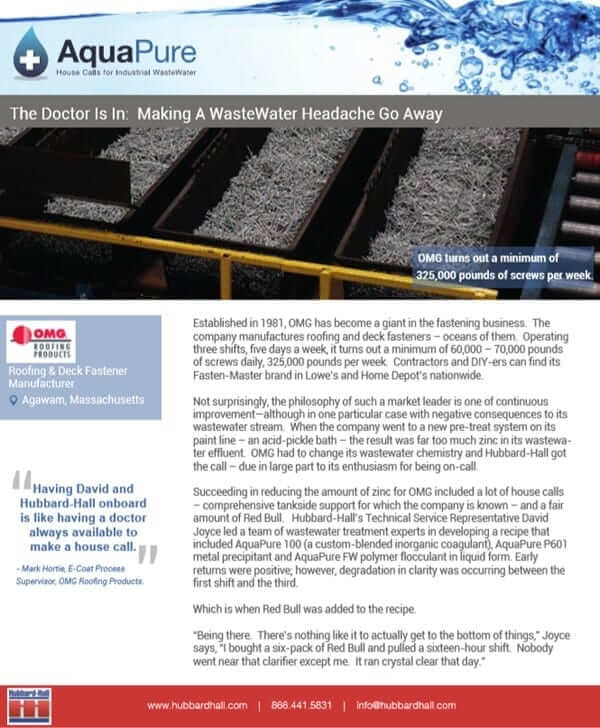 Established in 1981, OMG has become a giant in the fastening business. The company manufactures rooﬁng and deck fasteners. Operating three shifts, ﬁve days a week, it turns out a minimum of 60,000 – 70,000 pounds of screws daily, 325,000 pounds per week. Contractors and DIY-ers can ﬁnd its Fasten-Master brand in Lowe’s and Home Depot’s nationwide.

Succeeding in reducing the amount of zinc for OMG included a lot of House Calls – comprehensive tank side support for which the Hubbard-Hall is known – and a fair amount of Red Bull. Hubbard-Hall’s Technical Service Representative David Joyce led a team of wastewater treatment experts in developing a recipe that included AquaPure 100 (a custom-blended inorganic coagulant), AquaPure P601 metal precipitant and AquaPure FW polymer flocculant in liquid form. Early returns were positive; however, degradation in clarity was occurring between the ﬁrst shift and the third.

“Being there. There’s nothing like it to actually get to the bottom of things,” Joyce says, “I bought a six-pack of Red Bull and pulled a sixteen-hour shift. Nobody went near that clariﬁer except me. It ran crystal clear that day.”

Ultimately, consistency came to the waste stream in the form of jar testing, a protocol Hubbard-Hall recommended but OMG had never done before.

Having David and Hubbard-Hall onboard is like having a doctor always available to make a house call.
– Mark Hortie, E-Coat Process Supervisor, OMG Rooﬁng Products.

Excerpt: OMG, a giant in the fastening business, reduced the level of contaminants, principally zinc, from 2.3 ppm to 0.23 ppm, well below the regulated requirements of city and state agencies.