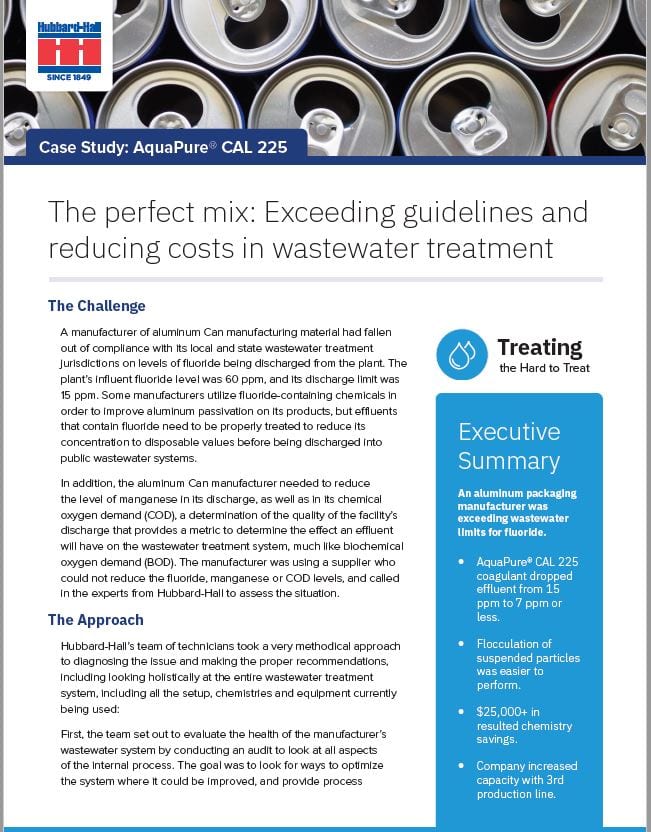 “The manufacturer sincerely thanked us for our work and support, something their previous supplier did not do or supply. Visits from Hubbard-Hall have impressed them, and they are looking forward to the continued relationship.”
David Joyce, Wastewater Specialist, Hubbard-Hall

The Challenge
An aluminum can manufacturing material had fallen out of compliance with its local and state wastewater treatment jurisdictions on levels of fluoride being discharged from the plant. The plant’s influent fluoride level was 60 ppm, and its discharge limit was 15 ppm. Some manufacturers utilize fluoride-containing chemicals in order to improve aluminum passivation on its products, but effluents that contain fluoride need to be properly treated to reduce its concentration to disposable values before being discharged into public wastewater systems.
In addition, the aluminum can manufacturer needed to reduce the level of manganese in its discharge, as well as in its chemical oxygen demand (COD), a determination of the quality of the facility’s discharge that provides a metric to determine the effect an effluent will have on the wastewater treatment system, much like biochemical oxygen demand (BOD). The manufacturer was using a supplier who could not reduce the fluoride, manganese or COD levels, and called in the experts from Hubbard-Hall to assess the situation.

The Approach
Hubbard-Hall’s team of technicians took a very methodical approach to diagnosing the issue and making the proper recommendations, including looking holistically at the entire wastewater treatment system, including all the setup, chemistries and equipment currently being used:
• First, the team set out to evaluate the health of the manufacturer’s wastewater system by conducting an audit to look at all aspects of the internal process. The goal was to look for ways to optimize the system where it could be improved, and provide process improvement recommendations that includes the required training for the facility operators of the system.
• Second, the ensuing evaluation consisted of a full diagnosis of the system, beginning with a project outline meeting in which Hubbard-Hall’s expert technicians discuss the existing state of the wastewater system and reviews any potential process improvements. Those could include reducing waste, costs and energy usage, and eliminating discharge issues.
• Third, a physical examination of the system by Hubbard-Hall’s team follows to assess equipment setup, and also to ensure the type and suitability of the wastewater treatment system. That also includes taking influent samples back to the Hubbard-Hall lab to perform “jar tests,” which simulates a full-scale water treatment process and provides technicians a reasonable idea of the way a treatment chemical will behave and operate with a particular type of raw water.
The Hubbard-Hall team’s recommendation was to utilize AquaPure® CAL 225, a concentrated blended inorganic coagulant that offers excellent conditioning characteristics in a variety of wastewater to remove fluoride and ortho- and pyro-phosphates that are generally present in alkaline cleaning and metal finishing wastewater.

The Outcome
Aquapure CAL 225 is a special blend designed to attract dissolved fluoride and Phosphate Ions from wastewater while it neutralizes negative charges which hold suspended particles in solution which allowed for easier flocculation in the manufacturer’s wastewater system. During a one week trial, the manufacturer reported discharging fluoride at 7 ppm or even lower, as well as a reduction in manganese and C.O.D. levels. In addition to meeting and exceeding the local and state wastewater discharge guidelines, the manufacturer reported they expected to see an overall cost savings of over $25,000 per year by using AquaPure® CAL 225 compared to their previous chemistry. Also, the manufacturer announced that they planned to open an additional third processing line now that they can adequately meet effluent guidelines, thus increasing their capacity even more and also increasing their year-over-year cost savings.

Excerpt: An aluminum can manufacturing material had fallen out of compliance with its local and state wastewater treatment jurisdictions on levels of fluoride being discharged from the plant. The plant’s influent fluoride level was 60 ppm, and its discharge limit was 15 ppm.