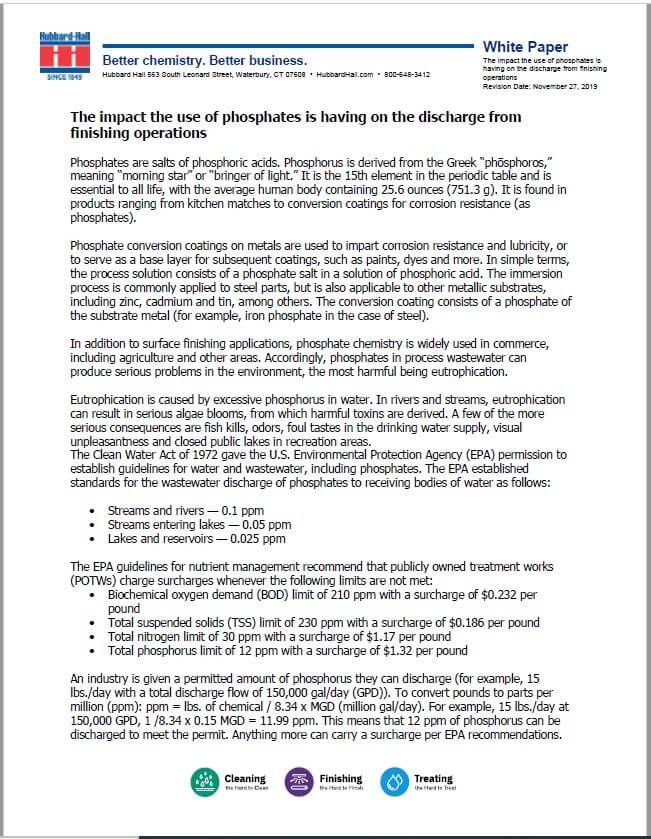 Phosphates are salts of phosphoric acids. Phosphorus is derived from the Greek “phōsphoros,” meaning “morning star” or “bringer of light.” It is the 15th element in the periodic table and is essential to all life, with the average human body containing 25.6 ounces (751.3 g). It is found in products ranging from kitchen matches to conversion coatings for corrosion resistance (as phosphates).

Phosphate conversion coatings on metals are used to impart corrosion resistance and lubricity, or to serve as a base layer for subsequent coatings, such as paints, dyes and more. In simple terms, the process solution consists of a phosphate salt in a solution of phosphoric acid. The immersion process is commonly applied to steel parts, but is also applicable to other metallic substrates, including zinc, cadmium and tin, among others. The conversion coating consists of a phosphate of the substrate metal (for example, iron phosphate in the case of steel).

In addition to surface finishing applications, phosphate chemistry is widely used in commerce, including agriculture and other areas. Accordingly, phosphates in process wastewater can produce serious problems in the environment, the most harmful being eutrophication.

Eutrophication is caused by excessive phosphorus in water. In rivers and streams, eutrophication can result in serious algae blooms, from which harmful toxins are derived. A few of the more serious consequences are fish kills, odors, foul tastes in the drinking water supply, visual unpleasantness and closed public lakes in recreation areas.
The Clean Water Act of 1972 gave the U.S. Environmental Protection Agency (EPA) permission to establish guidelines for water and wastewater, including phosphates. The EPA established standards for the wastewater discharge of phosphates to receiving bodies of water as follows:

Phosphorus Removal: There are today two primary technologies for phosphate removal from wastewater — chemical and biological.

Chemical Removal: A number of chemical agents have been used to remove phosphorus from wastewater. In an alkaline solution, calcium reacts to form calcium carbonate. At pH ≥ 10, the excess calcium bonds with phosphorus to precipitate as a hydroxyapatite. Copperas (for example, ferrous sulfate) or iron bonds with phosphorus to form iron phosphate, which easily precipitates out. Alum, or more commonly potassium alum, KAl(SO4)2•12H2O), works much like calcium, but its usage will be based upon removal requirements. Current research in our laboratory is underway involving new technology. This technology has a long track record of proven success and is readily available, cost effective and affords ease of operation.

Biological Removal: Certain bacteria are capable of storing phosphorus as a polyphosphate and are referred to as polyphosphate-accumulating organisms (PAO). These systems involve different setups, depending on the type of bacteria. In industrial applications, biological removal is used as a “Final Polish” to achieve permit limits. Research is also being done on biological phosphate removal. This technology has been shown to be an efficient means of phosphate removal. There are multiple types of systems to choose from and training is readily available to new operators.
The ultimate goal of all of these efforts is a clean environment. For example, a Hypoxia Task Force currently involves 11 states and the EPA working together to reduce the size of the Gulf of Mexico’s dead zone. This zone comprises the largest hypoxia zone in the United States. The task force was established in May 1998 with a charter. Members consist of federal, state and tribal representation, and they are diligently working to solve this serious problem.

Beyond these efforts, each state is working on a tailored nutrient management plan for recovery of impaired waters.

Excerpt: Phosphates in process wastewater can produce serious problems in the environment. Today, there are two primary technologies for phosphate removal from wastewater — chemical and biological.