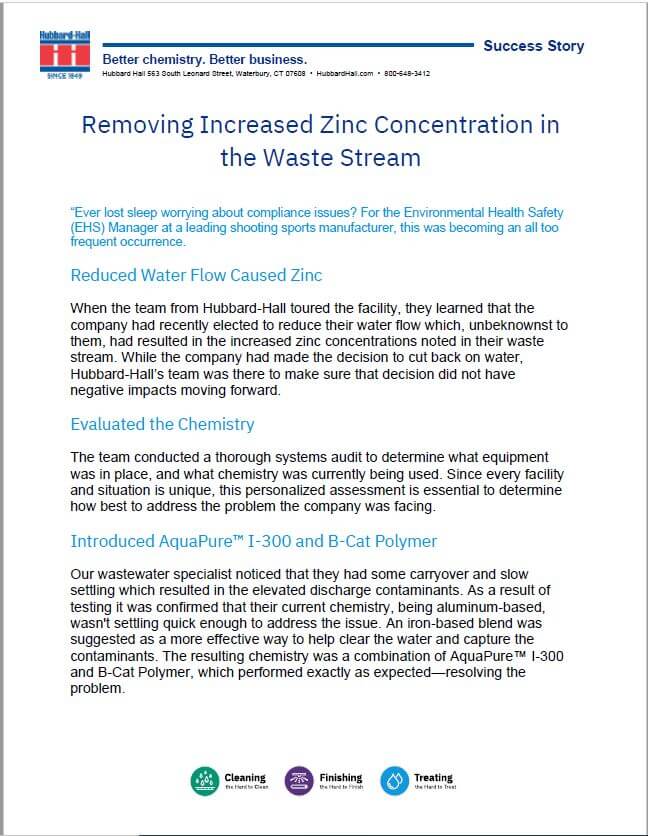 Ever lost sleep worrying about compliance issues? For the Environmental Health Safety (EHS) Manager at a leading shooting sports manufacturer, this was becoming an all too frequent occurrence.

Reduced Water Flow Caused Zinc
When the team from Hubbard-Hall toured the facility, they learned that the company had recently elected to reduce their water flow which, unbeknownst to them, had resulted in the increased zinc concentrations noted in their waste stream. While the company had made the decision to cut back on water, Hubbard-Hall’s team was there to make sure that decision did not have negative impacts moving forward.

Evaluated the Chemistry
The team conducted a thorough systems audit to determine what equipment was in place, and what chemistry was currently being used. Since every facility and situation is unique, this personalized assessment is essential to determine how best to address the problem the company was facing.

Introduced AquaPure™ I-300 and B-Cat Polymer
Our wastewater specialist noticed that they had some carryover and slow settling which resulted in the elevated discharge contaminants. As a result of testing it was confirmed that their current chemistry, being aluminum-based, wasn’t settling quick enough to address the issue. An iron-based blend was suggested as a more effective way to help clear the water and capture the contaminants. The resulting chemistry was a combination of AquaPure™ I-300 and B-Cat Polymer, which performed exactly as expected—resolving the problem.

Outcome
Hubbard-Hall’s involvement extended beyond simply solving the immediate challenge. The team made sure that the operators had the training and understanding to better control their own destiny. Jar testing was demonstrated to them as a means of determining the best chemical dosing for any subsequent problems they might encounter. Wastewater changes throughout the day—due to more production, less production, etc.—so, by providing them the knowledge and tools to determine the condition of their water at any particular time, they can make the necessary adjustments on their own based on the results of the test.

Before they left our team was told, “Our numbers have never been this low.” Music to our ears! By the way, the EHS Manager has never slept so soundly. Thank you for asking.

Excerpt: Ever lost sleep worrying about compliance issues? For the Environmental Health Safety (EHS) Manager at a leading shooting sports manufacturer, this was becoming an all too frequent occurrence.