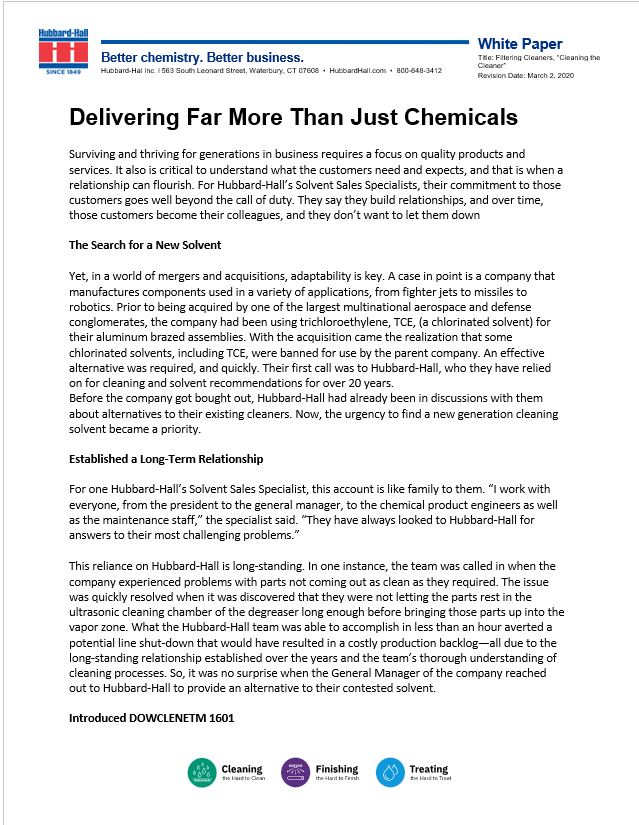 Surviving and thriving for generations in business requires a focus on quality products and services. It also is critical to understand what the customers need and expects, and that is when a relationship can flourish. For Hubbard-Hall’s Solvent Sales Specialists, their commitment to those customers goes well beyond the call of duty. They say they build relationships, and over time, those customers become their colleagues, and they don’t want to let them down

The Search for a New Solvent

Yet, in a world of mergers and acquisitions, adaptability is key. A case in point is a company that manufactures components used in a variety of applications, from fighter jets to missiles to robotics. Prior to being acquired by one of the largest multinational aerospace and defense conglomerates, the company had been using trichloroethylene, TCE, (a chlorinated solvent) for their aluminum brazed assemblies. With the acquisition came the realization that some chlorinated solvents, including TCE, were banned for use by the parent company. An effective alternative was required, and quickly. Their first call was to Hubbard-Hall, who they have relied on for cleaning and solvent recommendations for over 20 years.
Before the company got bought out, Hubbard-Hall had already been in discussions with them about alternatives to their existing cleaners. Now, the urgency to find a new generation cleaning solvent became a priority.

For one Hubbard-Hall’s Solvent Sales Specialist, this account is like family to them. “I work with everyone, from the president to the general manager, to the chemical product engineers as well as the maintenance staff,” the specialist said. “They have always looked to Hubbard-Hall for answers to their most challenging problems.”

This reliance on Hubbard-Hall is long-standing. In one instance, the team was called in when the company experienced problems with parts not coming out as clean as they required. The issue was quickly resolved when it was discovered that they were not letting the parts rest in the ultrasonic cleaning chamber of the degreaser long enough before bringing those parts up into the vapor zone. What the Hubbard-Hall team was able to accomplish in less than an hour averted a potential line shut-down that would have resulted in a costly production backlog—all due to the long-standing relationship established over the years and the team’s thorough understanding of cleaning processes. So, it was no surprise when the General Manager of the company reached out to Hubbard-Hall to provide an alternative to their contested solvent.

In researching alternate cleaners for the company, the team at Hubbard-Hall determined that the aqueous cleaning chemicals being considered were incapable of the surface tension necessary to remove all the contaminants from the intricate design elements and blind holes on the parts. They, in turn, proposed a modified alcohol solvent called DOWCLENETM 1601 produced by Safechem. DOWCLENE 1601 had none of the trans-dichloroethylene (t-DCE) that the company’s previous solvent had, and it produced results as good or better than they had been experiencing.

However, this new cleaner would require an investment in new equipment. The company was already planning for that reality since their existing equipment was nearly 40 years old. What they weren’t planning on was what the Hubbard-Hall team shared with company executives when they discussed the economic impact of this change-over.
The reality was that the new equipment was going to cost them over $500,000. What they didn’t realize was that — since the new system operates in a closed vacuum environment — their chemical costs were going to be dramatically reduced. How dramatic, you might ask? Hubbard-Hall’s team went over the math with the president and showed him that their return on investment would be approximately three years.

Not only did the team from Hubbard-Hall help the company find an environmentally safer alternative to their previous chemicals, but their new cleaner would result in substantial reductions in annual chemical expenditures.

On this modified alcohol cleaner, there simply is no better alternative available. The client trusts Hubbard-Hall’s judgment and knows that they have their best interest at heart. The crisis was avoided once again.

Our People. Your Problem Solvers

Expertise you can trust. 32% of Hubbard-Hall associates are in tech support, customer service, or sales. This means that you get answers fast while the rest of our team gets your order delivered on time and in spec.

Excerpt: The company had been using trichloroethylene, TCE, (a chlorinated solvent) for their aluminum brazed assemblies. With the acquisition came the realization that some chlorinated solvents, including TCE, were banned for use by the parent company. An effective alternative was required, and quickly. Their first call was to Hubbard-Hall who they have relied on for cleaning and solvent recommendations for over 20 years.