The heart of industry, almost nothing can be manufactured without heat-treating. We recently caught up with Bob Farrell (Senior Vice President and Technical Director at Hubbard-Hall) and asked him a few questions about the heat-treat market, what he has seen in his 30 years of experience and what lies ahead for manufactures using these applications. 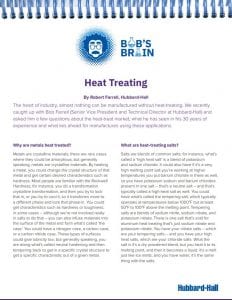 Why are metals heat treated?
Metals are crystalline materials; there are rare cases where they could be amorphous, but generally speaking, metals are crystalline materials. By heating a metal, you could change the crystal structure of that metal and get certain desired characteristics such as hardness. Most people are familiar with the Rockwell Hardness; for instance, you do a transformation crystalline transformation, and then you try to lock that in, or you try to cool it, so it transforms more to a different phase and lock that phase-in. You could get characteristics such as hardness or toughness; in some cases — although we’re not involved really in salts to do that — you can also infuse materials into the surface of the metal and form what’s called ‘the case.’ You could have a nitrogen case, a carbon case, Black oxide is the conversion of a base metal material to an oxide of that base metal material. A prime example would be Fe3O4, which is black iron oxide, otherwise known as magnetite; another is a CuO, or copper monoxide. It occurs when the chemicals react with a base material to form an oxide of the base’s primary constituent. In the case of stainless steel, not only does it form oxides, but it also forms sulfides of the base materials that tend to be black as well. or a carbon nitride case. These types of surfaces could give lubricity too, but generally speaking, you are doing what’s called neutral hardening and then tempering back to get in a specific crystal structure to get a specific characteristic out of a given metal.

What are heat-treating salts?
Salts are blends of common salts; for instance, what’s called a ‘high heat salt’ is a blend of potassium and sodium chloride. It could also have if it’s a very high melting point salt you’re working at higher temperatures you put barium chloride in there as well, so you have potassium sodium and barium chlorides present in one salt — that’s a neutral salt — and that’s typically called a high-heat salt as well. You could have what’s called the tempering salt, which typically operates at temperatures below 1000°F but at least 50°F to 100°F above the melting point. Tempering salts are blends of sodium nitrite, sodium nitrate, and potassium nitrate. There is one salt that’s sold for aluminum heat treating that’s just sodium nitrate and potassium nitrate. You have your nitrate salts — which are your tempering salts — and you have your high heat salts, which are your chloride salts. What the salt is it’s a dry powdered blend, but you heat it to its melting point, and then it becomes a liquid. It’s a melt just like ice melts, and you have water; it’s the same thing with the salts.

Why use heat treat salts?
The methods that are used to heat treat metals are salts or furnaces where you could have parts on a conveyor belt going into a high heat furnace, and it’s just air that’s around that heats the parts. So the parts will come out, and then you do a quench to cool them down to try to lock in a structure or cool them down and then heat them back up to a range typically between 300°F and 800°F, and temper back the metal. That can be done on a lot of parts that are fasteners, for instance, small parts. Where salts are really used are where you want very little distortion. As you know, if you heat something and you cool it rapidly, it could distort. Salts because they are relatively dense liquids lessen the amount of distortion during the heat-treating process. Therefore salts are used on things such as precision gears; lawnmower blades are a huge area where salts are used primarily for distortion purposes. What are salts doing when you look at molten salt? It’s used for two purposes: it’s used to add heat to a part or used to take heat away from a part, such as in a quench. If you remember thermodynamics, heat flows from hot to cold, so if you have a hot salt, the heat flows into the part to heat it up to a temperature to neutral harden it, and then that could go into a quench, and the salt is cooler than the part. As it goes in the heat goes from the part back to the salt. The salt will absorb heat to a much greater extent and much quicker than say air would if you did an air quench, which some people do out of furnaces.

What types of heat-treating salts are there?
To summarize, there are three basic types of salts: tempering salts which are the salts that operate say from 300°F to 900°F range and those are typically used either to heat the part up if the part does a phase transition in that temperature range or to cool the part down to that range and lock in a crystal structure of the part. You have your neutral salts that are typically used above a 1000°F more typically used in a range of 1500°F to 1800°F — maybe as high as 2100°F– for the neutral hardening. The third salt are the case hardening salts; you don’t see them used as frequently anymore, but if you have a part where you want low distortion yet you want to do a carbon or nitrogen or a carbon-nitrogen combination case on the part — which is a very thin layer — you could use your carburizing or case hardening salt. There are really three classes of salts that are still out there being used.

What does rectification of the high heat bath do, and how should a person go about adding pellets?
High heat baths react because they react with oxygen and CO2 in the air. You can imagine you have this molten solution of salts; it’s glowing red, it’s reacting with CO2 and oxygen to form carbonates in the bath, but it also forms oxides in the bath. What happens when you get those is it can interfere with the heat transfer, and it could lead to some difficulties with the metallurgy of the part. What you have to do is you have to rectify to remove those oxides, and that’s typically done with pellets, or as in days past people would bubble methyl chloride gas through a salt to rectify it. What the rectifier pellets are really doing is it’s eliminating those oxides that are built up in there and neutralizing the carbonate. The pellets generate ammonia in the salt, so you want to add the pellets slowly, and of course, with any rectification, you may do the rectification when work is not in the bath. You’re evolving ammonia that reacts to neutralize the carbonates and react with the oxides. Make sure that’s done in a well-ventilated area as well so you get none of the gases that may be formed escaping into the work environment.

What’s the best method of desludging a high heat bath and tempering pot?
The best way to de-sludge a bath would be to cool it down as close to the melting point as possible within 50°F to 100°F of the melting point. What you’re doing with desludging — and you see it more with the tempering salts — are you come out of a high heat bath that’s the chloride bath with salts that have melting points of 1000°F or higher, and you go into a tempering bat that’s operating below that melting point. The salt the neutral salts will come off in the tempering salt, and of course, they’re not melted at the temperature of the tempering bath, so those salts will come out, and it’ll precipitate out in the form of sledge. What you do is you cool that tempering bath down to if it’s a 275°F melt tempering bath, you cool it down to say 350°F, and then you go in, and you ladle out the sludge that’s falling out. It’s almost like snow falling; imagine your tempering salts in the atmosphere; the chloride salts the snow that falls down and accumulates at the bottom of the pot, and you take it out. Contaminants that are dragged into high heat baths — say the work isn’t clean quite well enough or there’s a lot of grit and grime or particulate matter on there — you could also get these sludges forming in a neutral bath, the high-temperature neutral bath, and see the same thing. Say the salt bath has a melting point of a 1000°F, you’d cool it down to maybe 1075°F and then slowly and very carefully, of course, go in and try to ladle out from the bottom of the salt bath the contaminates to get them out.

What are the differences and advantages of the several tempering salts you provide?
There really isn’t much difference. It really is all predicated on what temperature you want to operate at. With the exception of the salt that’s used on aluminum, that salt is very specific because you don’t want nitrites in a salt that’s used on aluminum. So, it really depends on the factors that come into play; and of course the cost of the salt — sodium nitrite being the most expensive ingredient that’s typically in there — but it’s also the ingredient that gives you a lower melting point. I recommend a 275°F melt point; it’s a very precise melt point and it gives you an operating range of up to 1000°F. The salt could be used for a lot of applications; if you want a less expensive salt, you could go to a 300°F melt point salt and use that instead, but generally speaking, there’s not a lot of difference in the heat absorption or the heat conduction characteristics of the tempering salts when all is said and done.

Where do I send samples for testing?
We do the testing down in our Inman, South Carolina facility. They’d be sent into the attention of Dr. Douglas Patton, and he does all the salt and salt analysis for us.