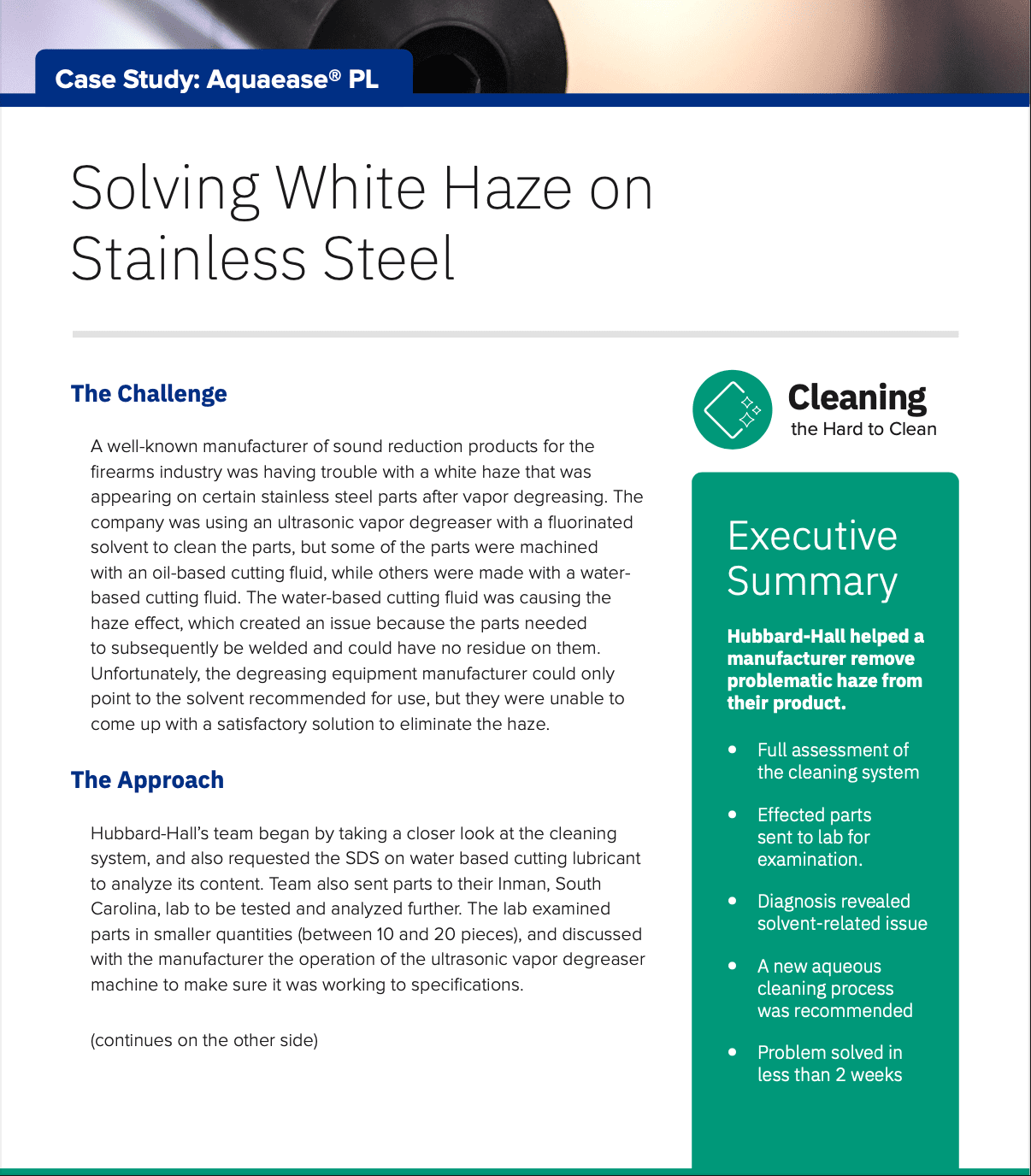 A well-known manufacturer of sound reduction products for the firearms industry was having trouble with a white haze that was appearing on certain stainless steel parts after vapor degreasing. The company was using an ultrasonic vapor degreaser with a fluorinated solvent to clean the parts, but some of the parts were machined with an oil-based cutting fluid, while others were made with a water- based cutting fluid. The water-based cutting fluid was causing the haze effect, which created an issue because the parts needed to subsequently be welded and could have no residue on them. Unfortunately, the degreasing equipment manufacturer could only point to the solvent recommended for use, but they were unable to come up with a satisfactory solution to eliminate the haze.

Hubbard-Hall’s team began by taking a closer look at the cleaning system, and also requested the SDS on water based cutting lubricant to analyze its content. Team also sent parts to their Inman, South Carolina, lab to be tested and analyzed further. The lab examined parts in smaller quantities (between 10 and 20 pieces), and discussed with the manufacturer the operation of the ultrasonic vapor degreaser machine to make sure it was working to specifications.

The Hubbard-Hall lab technicians determined that the solvent that the manufacturer was utilizing would not be able to satisfactorily remove the residue left by the water-based cutting fluid because the contaminant soil was incompatible with any solvent cleaning options. The team then recommended that the customer use an aqueous cleaning process on the parts where the water-based cutting fluid was being used.

Hubbard-Hall installed an aqueous cleaning line for the manufacturer with Aquaease PL for the cleaner. The product is a low foam, heavy duty caustic, chelated alkaline soak, ultrasonic, electro, and spray cleaner for steel, stainless steel, nickel, copper, and copper alloys. Aquaease PL has high detergency, is a biodegradable wetting system, removes light surface oxides and light rust on steel and 400 series stainless steel, and has excellent particulate soil removal when used as a spray or with ultrasonics. It is also easily waste treated, effective at low concentrations, and effective at low operating temperatures.

Less than 14 days from the first phone call to Hubbard-Hall, the
audit took place and the lab work was completed, resulting in the customer getting a viable solution that improved their overall cleaning efficiency, reduced the possibility of rejects, and provided the manufacturer with a better product.

Excerpt: Hubbard-Hall helped a manufacturer remove problematic haze from their product by giving the manufacturer a full assessments of their cleaning system and then sending effected parts to the lab for examination. The diagnosis revealed that the manufacturer was having a solvent related issue, which Hubbard-Hall solved in less than 2 weeks by recommending a new aqueous cleaning process.