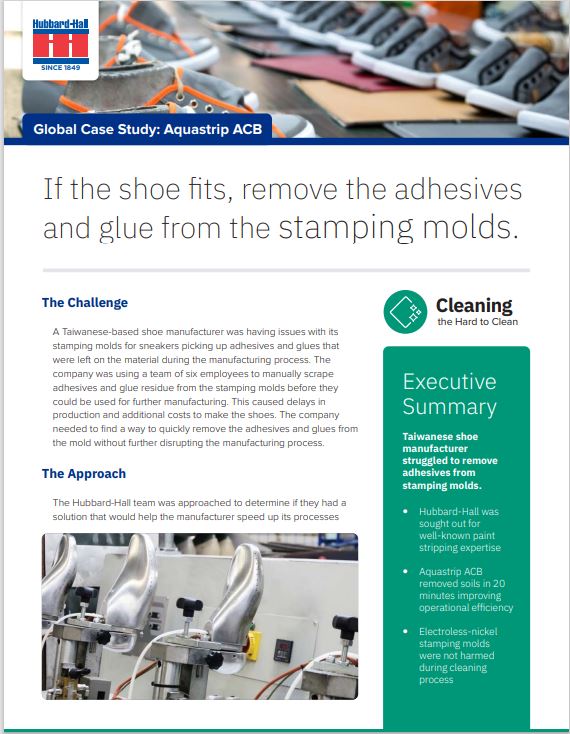 The Hubbard-Hall team was approached to determine if they had a solution that would help the manufacturer speed up its processes for removing the adhesives and glues from the stamping molds. The manufacturer knew HubbardHall was well-known globally for their effective use of paint stripping, and the lab team soon began testing the stamping molds with various products. Hubbard-Hall’s Aquastrip ACB proved to be the most effective process to remove the unwanted adhesives and glue. It is a mildly acidic liquid concentrate, often used to remove tenacious polymeric coatings — including CARC and TGIC epoxy-hybrid powder coat from ferrous and non-ferrous metals. The fast, safe, and effective Aquastrip ACB paint stripper does not contain any hazardous solvents, is versatile, and can be used at temperatures ranging from 120-180ºF.

Hubbard-Hall’s Aquastrip ACB was able to quickly clean the stamping molds in under 20 minutes, thereby saving precious time in the manufacturing process for the company, as well as allowing them to reduce overhead labor costs by eliminating the need for six workers to manually clean the molds. More importantly, the Aquastrip ACB product did not harm the plated electroless-nickel stamping molds, allowing them to have a longer lifespan in the manufacturing process. The manufacturer may end up using the process at their facilities in Brazil and Turkey, where along with Taiwan, more than 80% of shoes are manufactured using this same stamping mold process.