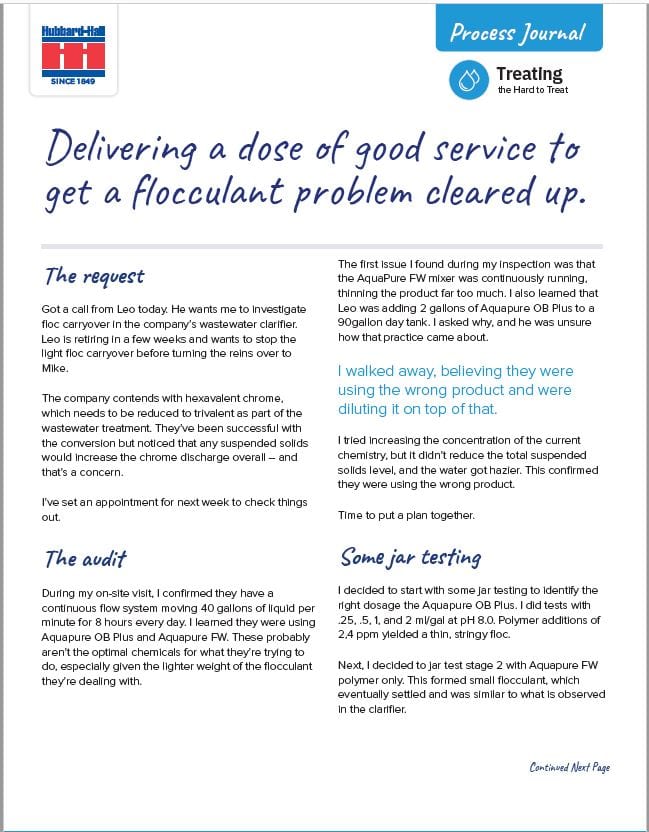 The request
Got a call from Leo today. He wants me to investigate floc carryover in the company’s wastewater clarifier. Leo is retiring in a few weeks and wants to stop the light floc carryover before turning the reins over to Mike.

The company contends with hexavalent chrome, which needs to be reduced to trivalent as part of the wastewater treatment. They’ve been successful with the conversion but noticed that any suspended solids would increase the chrome discharge overall — and that’s a concern.

I’ve set an appointment for next week to check things out.

The audit
During my on-site visit, I confirmed they have a continuous flow system moving 40 gallons of liquid per minute for 8 hours every day. I learned they were using Aquapure OB Plus and Aquapure FW. These probably aren’t the optimal chemicals for what they’re trying to do, especially given the lighter weight of the flocculant they’re dealing with.
The first issue I found during my inspection was that the AquaPure FW mixer was continuously running, thinning the product far too much. I also learned that Leo was adding 2 gallons of Aquapure OB Plus to a 90gallon day tank. I asked why, and he was unsure how that practice came about.

I walked away, believing they were using the wrong product and were diluting it on top of that.

I tried increasing the concentration of the current chemistry, but it didn’t reduce the total suspended solids level, and the water got hazier. This confirmed they were using the wrong product.

Time to put a plan together.

What happens next? Download the Process Journal to find out.

Excerpt: Do you document the process and progress of your projects? Our wastewater specialists use Process Journals to document their thinking, ideas, and development of the project. Find out what happened when a manufacturer had a flocculant problem and the steps that were taken to clear it up.